Readipop Festival celebrate its 5th anniversary this Summer and takes place by the banks of the River Thames in Christchurch Meadows (10 mins walk from Reading Station) between Friday 10th and Sunday 12th July. All money raised by the festival helps support Readipop’s charity work providing access to music for vulnerable young people and other underrepresented communities locally.

Supporting local talent is a key goal of both Readipop Festival and Readipop’s charity work. This year’s festival sees exclusive shows from Reading reggae collective The Drop and rare groovers The Fever 45s plus a special showcase of Readipop’s D&D artists (Discovery and Development) on Saturday 11th July. The showcase will be hosted by aspiring local musicians on the Readipop AAA programme and include performances from Ameli, Amy-Ray, Ray Wills and Searchlight Sun. Also, BBC Introducing in Berkshire will be hosting a takeover on Sunday 12th July and selecting the opening acts on the mainstage on Friday 10th and Saturday 11th July.

“It’s our fifth birthday this year so we’re really pulling out the stops!” explained Readipop Festival Director Gavin Lombos. “Last year was our best yet with a fantastic all-ages crowd enjoying great music in the sunshine.  We’re thrilled to have the ultimate party starters Sugarhill Gang & Furious 5 headlining our opening night, they are so much fun live with “Rappers Delight”, “Apache”, “The Message” and “White Lines” sure to get Christchurch Meadows dancing! Badly Drawn Boy has just released his first single in seven years and it sounds great, we can’t wait hear him play new material alongside classics from the “About A Boy” soundtrack and his Mercury Music Prize winning album “The Hour Of Bewilderbeat”

“We have loads of superb new and current acts playing this year too” Gavin continues, “Flyte, Sink Ya Teeth and Brother Zulu are really exciting bands who are destined for big things and we still have plenty more acts to announce, old and new, local and international.
Also this year for the first time we’re hosting “In Conversation” sessions where established musicians including Stephen Morris (New Order/Joy Division) will be discussing their careers and giving tips for aspiring musicians.”

“"Most importantly, the Festival will support our work changing lives through music in Reading and the Thames Valley. From providing youth provision and 1:1 Music mentoring, supporting some of Reading’s most vulnerable young people, to running accessible community bands for a wide range of ages and much more, Readipop - and therefore Reading and the Thames Valley - benefit directly from this event."

In addition to the music, attendees can also enjoy local real ales and craft beer, delicious street food, a record store and a Reading Etsy team market full of festival friendly arts, crafts and clothes stalls. Kids are also welcomed with free tickets for under 14s (when accompanied by adults) and there’s a great family area with storytellers, arts & crafts, dance and music workshops.

Weekend tickets are available now from just £30 each (but be quick, each ticket release is limited and often sell fast!).

Here’s the first eighteen acts to be announced for Readipop Festival 2020: 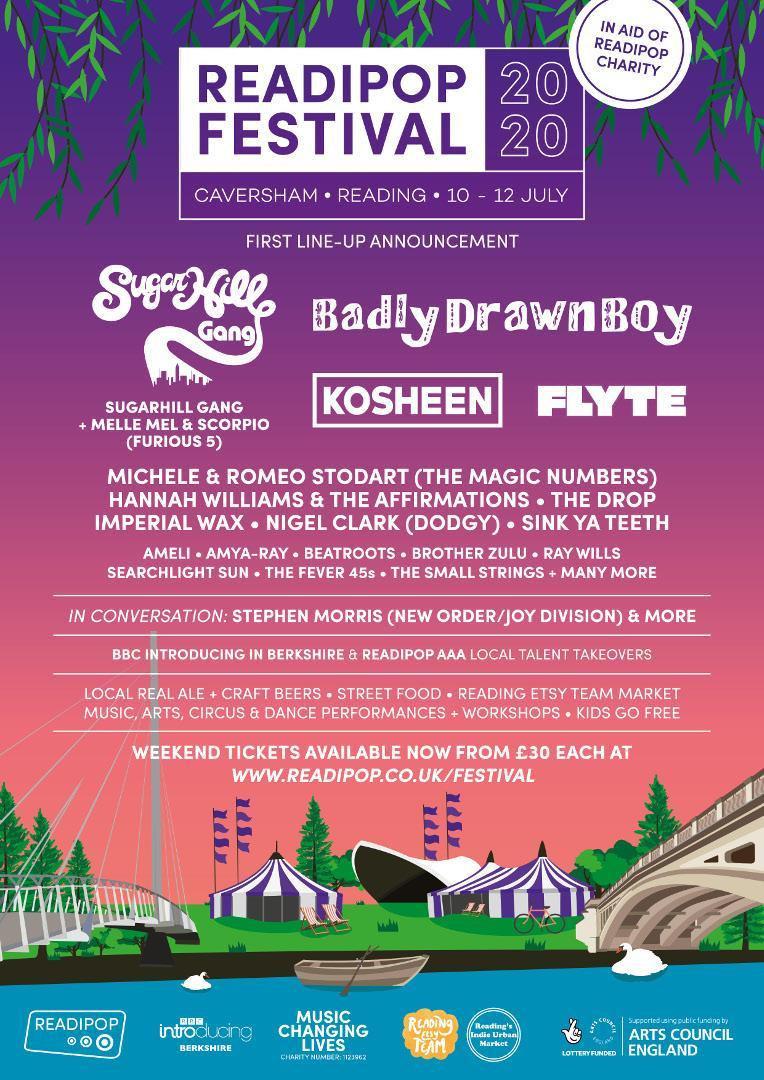